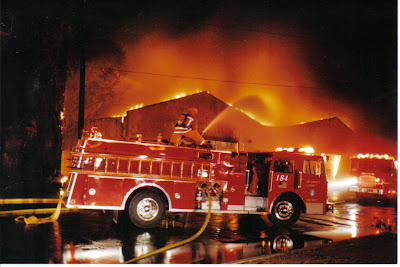 I really don’t know where to start, other than to re-introduce myself:
I drive a fire truck for a large southern California department. Really large. Let’s put it this way: I could start the day with my toes in the sand at the beach, drive up to snow-capped mountains, and across a vast desert all in one day, and still be within the department’s jurisdiction. We have boats, helicopters, bulldozers, heavy tow trucks, air units, light units, haz mat and USAR squads, and a couple of Honda Prius.
Of course, my station covers just a tiny fraction of that county. It sits on the west-end of a suburb, dubbed P-Town by the local gangbangers. I’ve worked here for almost half of my 15 years in the fire service. Seven other stations protect this city as well. 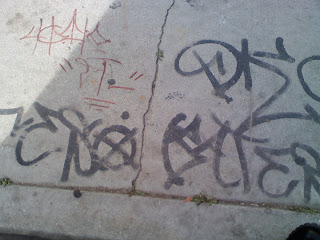 My district is a mix of residential and commercial. Four major freeways pass through it, along with two rail lines and a flood control channel. It’s home to a prominent university, a state hospital, a hotel, and headquarters to a couple of national companies. We also have three mobile home parks and a strip club. And yet we only have one Starbucks—go figure.
On any given day, I might run calls with local PD, county sheriffs, State police (at the college), or CHP (California Highway Patrol officers, who would issue a citation to their own grandmothers).
My station shares grounds with one of several training towers for the department. Most mornings we wake to sounds of a military-style recruit academy beginning another grueling day of training. Brings back lots of great memories. 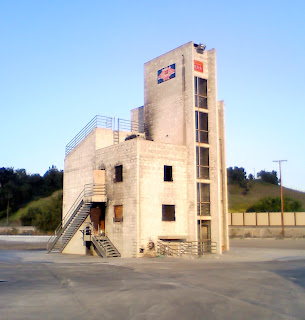 Here’s what’s going on this week: One of our most recent calls was a fatality fire. We’re participating in ongoing firefighter survival training drills. We have a new boot fireman. And, oh yeah, our new rig got wrecked. So you’re going to hear about some of this in the weeks to come.
On my days off, I play in a rock band, and try my best to parent two recalcitrant teens. Loads of laughs.
Stick around…
(P.S. Next week, I’ll be hosting a give-away contest here on “The Damage is Done.”)
Posted by brian at 6:36 AM 3 comments:

The Damage is Done 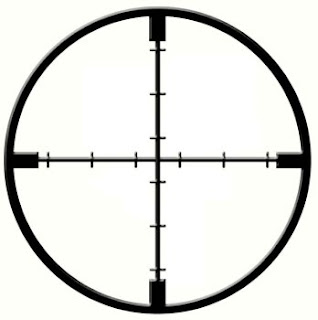 A few weeks ago, I alluded to this little fiasco: 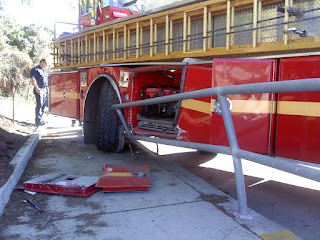 Um, actually, I wrote a haiku about it.
But I probably shouldn’t say too much about it here, because it is now the subject of a department investigation. My written report states that, during a training exercise, we were completing a low speed left hand turn when the tillerman—the guy who steers the trailer portion of the rig—apparently oversteered right up on to the sidewalk and into a steel rail. I was driving the tractor and did nothing to cause the crash.
It seems that the department has experienced an increase in these types of mishaps in the last year or so, and has lost all sense of humor about it. (They may want to revisit their training protocols, but hey, what would I know?)
So now this department is gunning for someone to blame, and I am in the crosshairs.
Fan-freaking-tastic.
Posted by brian at 6:29 AM 6 comments:

Email ThisBlogThis!Share to TwitterShare to FacebookShare to Pinterest
Labels: Blogs and blogging, fire truck accidents, The Damage is Done

Switched From Plan B 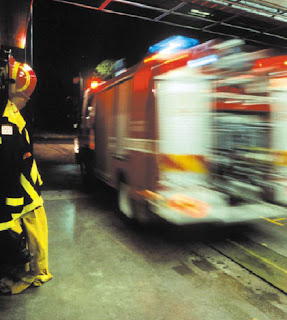 Well, I lost the domain name for my blog, Switch 2 Plan B.

So I have to start all over.

But that’s ok; I’m sort of taking it as a challenge—a phoenix rising from the ashes, born-again hard, I won’t back down...all that sort of stuff.

Still, it raised a few questions, like “Should I keep blogging?” “Is it still worth doing?” “Should I change the theme, or vibe of my blog?” “Do birds have teeth?”

And then of course, I realized, who cares?

So, I’ll be serving up the same dreck as the last blog: War-stories from the fire station, life’s little ironies, most embarrassing moments, disappointments, let-downs, canceled calls, ruminations, strange-but-true anecdotes. Whatever.

Welcome back to Day 1.