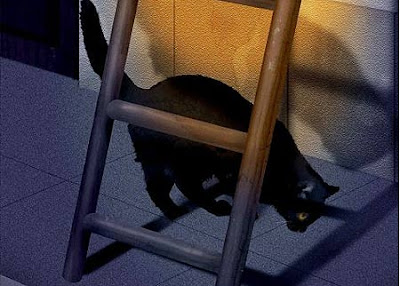 Firemen are a superstitious lot. They have their own peculiar notions about what seemingly innocuous turn of events may actually invite bad luck. And while they have no problem walking under a ladder, other seemingly benign circumstances can harbinger impending disaster.
If, for example, the boot fireman announces that he would like a nice ripping fire that shift, that would pretty much guarantee a shut-out, call-wise. On the other hand, breaking in a brand new set of bright yellow turnouts should assure that you’ll be getting banged out on some sort of messy run—a tar pot fire, perhaps, or a fuel spill on the freeway. (My new turnout pants caused a strip mall fire last shift. Sorry.)
The origins of other superstitions are somewhat more obscure. In our station, it is widely held that saying the name of our city more than three times will cause a busy shift (see the movie “Beetlejuice”). Closing the apparatus bay doors too early in the evening (any time before 9 p.m.) portends multiple calls after midnight. And missing the trashcan with your wadded-up paper napkin after dinner will likewise make for a lot of night runs. So there’s a lot of pressure on to make that three-point shot from across the kitchen.
As far as I know, there are no scientific studies to back the claims of these firefighter superstitions. But there must be some definite cosmic causal relationship. So it is unwise to tempt or anger the run-gods by some act of negligence or hubris on your part.
And although I’m an otherwise perfectly reasonable man, I have, over the years, observed an undeniable cause-and-effect regarding certain circumstances and thus cultivated my own particular superstitions. I would swear that a heavy meal—pasta and meat sauce, or chili, for instance— almost inevitably leads to an extremely strenuous and extended call: A few hours in sweaty turnouts, pulling hose, climbing ladders, cutting roof, and sucking down a couple of air bottles, until that spicy sausage and red sauce is rising back up in your gullet.
It’s your own damn fault.
* * *
I haven’t forgotten about our little contest here at “The Damage is Done.” I’ll be drawing the winners in a few more days, but until then, it’s not too late—all you have to do to enter is follow my blog!
Posted by brian at 5:43 PM

So what does the flu ravaging through the station do to night calls?

Well then, I'm thinking it's all fruit and yogurt at the station from here on out. I bet your crew members will love that!

We whole heartedly believe that there is a minimum number of calls to run each day. If you don't run any during the day then you may as well keep a pot of coffee and some redbulls nearby that night.

Interesting about the pasta. In Upsala, spaghetti and chocolate cake used to bring fire calls.

Advice from one my early instructors is still good in these cases: don't eat more than your mask will hold.

Is there a reason why the word verification made me spell "morons" before posting this? :-)

Really glad you're back.

I came over to visit from your wife's blog...looking forward to reading more of your blog. I'm now a follower!

Um, what happened to your give away?