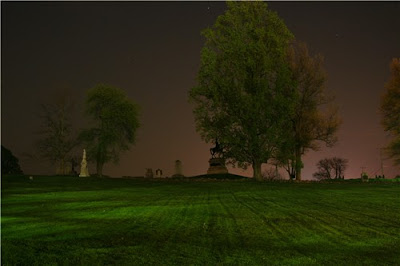 In some ways, the tone of the trip was set when we first sat down in the cramped seats of the Boeing 737 for our dawn departure out of Ontario to Washington/Dulles via Denver, CO. “Did you see those sparks coming from the jet engine,” a passenger behind us asked his traveling companion as we awaited push-back.
Great…
I knew right then that the day would not go as planned, and we wouldn’t make our connection or our destination until quite late. While the captain and mechanic inspected the aircraft on the tarmac below our tiny window seat, I frowned and fidgeted, mentally recalculating the day ahead. Eventually we were deplaned from the airless fuselage and herded back to the terminal gate, while airlines reps tapped away furiously at computers, looking for alternate routes for 139 passengers.
Billy and I were finally squeezed onto a flight with stops in Chicago and Cleveland before landing in Baltimore around 11:30 that night. Our one checked duffle bag was nowhere to be found, so we waited in the deserted terminal until it arrived on the next flight from Chicago…or Denver…I don’t know.
Exhausted, straggling out to our federal blue Nissan rental car in a vast parking lot, we negotiated our way out of BWI, but immediately became lost in the outskirts of Baltimore at midnight. Concise directions from a late-night patron outside the local 7-11, and we were finally headed towards our hotel in Pennsylvania, still some 60 miles away.
The tree-lined turnpikes narrowed, and the towns became smaller and further apart. I had visited our first destination years before, so I was navigating now by memory as well as maps. But a detour sign cast us out deeper into the black back roads, our passing headlights illuminating clapboard farmhouses and silent fields.
Over rolling cornfields and creek bottoms, an eerie fog settled, and the road ahead disappeared in a ghost-gray haze. Just as I was getting the sinking feeling we might be lost again, our car rolled up on a deserted crossroad that I immediately recognized:
“Billy,” I whispered to my son. “We’re in the middle of the peach orchard!”
It was an infamous landmark in the middle of the Gettysburg Memorial National Battlefield Park, and the site of some of the heaviest fighting 148 years ago. A lot of men had died at this crossroads.
For the next seven days, my son and I would be visiting many such battlefields, in a history-soaked road trip that would take us from Pennsylvania, to Maryland, and Virginia. And here at 1:30 in the morning, our field trip had just begun...
(to be continued)
Posted by brian at 6:20 AM 6 comments: 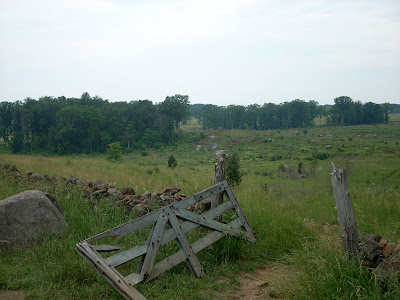 “but I’ve reason to believe
we both will be received
in graceland…”
In Paul Simon’s “Graceland,” the protagonist treks through the “cradle of the Civil War” accompanied by his young son, while taking stock of his own embattled heart and searching for some sort of redemption. It is a journey that looks both back through the past and ahead towards the future, seeking a kind of permanence in this mutable world.
So it was that song that was most with me as I made my way across rolling back roads in the early mid-Atlantic summer, my fourteen year-old son by my side in our rented federal blue Nissan, creased Triple A maps spread out across our laps. Our destination was various battlefields in small towns from Pennsylvania, through Maryland, and down to Virginia during the sesquicentennial of the American Civil War.
But as with even the most well planned trips, in the end I had arrived somewhere else entirely.
Along the way, there were sparking aircraft engines, missed connections, errant luggage, oppressively hot and sticky weather, wrong turns down indifferently marked southern turnpikes, endless miles of lush green landscapes, elusive fireflies in the evening gloom, an unlikely breakfast with a well-known actor in the front parlor of a small town inn, and a sleepless night attended, perhaps, by a restive ghost from some forgotten battle.
…We set off on life’s journeys expecting to find meaning, but in truth, the unexpected meanings set off to find us.
(To be continued…)
Posted by brian at 7:32 AM 4 comments: