So, I fell off my fire truck.

I keep telling my wife it’s a dangerous job.

Quint 187 is a 35-ton KME tillered truck, about 57 feet long and over 11 feet high, and I spent the morning getting the rig ready for our annual inspection by the assistant chief. I had been detailing some brass fittings on top, started climbing down off the side, missed my footing and fell straight back, landing on my back while simultaneously smacking my head against the brick wall of the app floor.

I fell about five feet—and if that doesn’t sound very high to you, I invite you to go out to your garage, set up your A-frame ladder, climb up to that height, lean back and let go.

I landed hard, and the initial shock of pain to my head, neck and back was intense.  Writhing on the floor, I unspooled a litany of expletives, most of which—coincidentally—rhymed with “fire truck.” (I might have taken the Lord’s name in vain a few times too; I can’t remember now.)

My feet were tingling, so I knew enough to stay put. If I had a neck or back injury, movement could exacerbate the problem. But the rest of my crew heard the florid string of F-words—expansive even by their engineer’s standards—and quickly came running.

I’ve spent over sixteen years running medical calls, so it was humbling to be on the receiving end of the care: To have my boot fireman peering down at me, determining the extent of my injuries, assessing vital signs, and asking all those nosy personal medical questions. As disembodied voices swirled overhead, I focused on the fluorescent light fixtures above me and tried to slow down my shock-induced hyperventilation. The tones went off for a still-alarm response at our station, dispatching the medic squad and ambulance. Great…just great. In minutes, the battalion-wide rumor mill would feature my name.

After the squadies arrived there was discussion of calling down an air squad and airlifting me to a trauma center, but I waved them off. “No air squad,” I told them, because quite frankly I prefer that my aircraft have wings and didn’t want to bump up the anxiety level with a choppy trip across the county skies. So we went via ground ambulance to a nearby hospital. I was fully “c-spined”—that is, immobilized from head to toe on a hard plastic backboard.

On the way, the paramedic with whom I run calls on daily basis was now sticking—and missing—my vein with an 18, and then 20 gage IV catheter. Thankfully he followed that up with 4 mg of morphine.

For the next three hours, I watched tiled ceilings roll by, as I was wheeled from the ambulance, through the halls of the ER, into the radiology lab, the CT scan room, and back to the ER. The hard plastic cervical collar that kept my spine in neutral alignment also prevented me from seeing much of anything around me, and the faces of various nurses, doctors, EMTs, and techs floated in and out of view. With the additional morphine and dilaudid on board, I was beginning to feel like The Dude during the “ Gutter Balls” sequence of the Coen Brother’s “The Big Lebowski.” 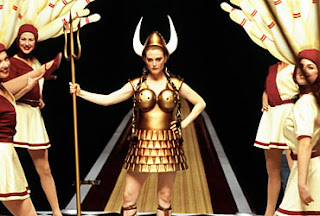 And since this hospital is the very same to which our fire medics transport ALS patients, curious co-workers dropped in to see what condition my condition was in. Throughout the afternoon, the battalion chief, nurse educator, and division safety officer all checked up on me, grinning at my slurred apologies and thanks.

The CT scan of my head was negative (no bleed or concussion), as were x-rays of my hips and neck. Images of my lower back indicated some straightening, probably due to muscles tensing up and guarding the affected area, and not necessarily a break or fracture per se. But the x-ray of my left elbow showed effusion—a build up of fluid often associated with a break or fracture. The ER doc told me to follow up with an orthopedic surgeon next week to determine if the joint is actually fractured.

I started the morning working on my rig, but by 3 pm was wobbling out of the local ER, my arm slung in a cast. And the following day, of course, I was sore as hell from the fall. Next week we’ll see if my arm is broken, but until then I’m deemed “temporarily totally disabled.”

Wow. Not a good day. I hope you will be a good patient for Julie. Wishes for a smooth and speedy recovery. Kathleen

!!!!!!! Why yes, you DO have a boatload for which to be thankful, don't you? My lord, you could've ended up here in Atlanta at the Shepherd spinal institute. NOT the way that I would like to have the opportunity to meet you and Julie. Thankful for the angels that cushioned your fall; God's not finished with you yet, Brian.
Perhaps it's a sign that it's time to write that book... ya think? Glad to see you back on the blog.. please don't let it take such an "eye-opener" to bring you back again!

p.s. my word verification is "underies". I don't know why I find that funny but I do...

Ouch. Be glad that it's just your elbow. A firefighter with whom I used to work landed on concrete and tweaked his back. He was out for over 6 months.

I was on a ladder at home which started to slide out from under me. In the attempt to save it, I fell off and down a half flight of stairs. I only got a humongous bruise on one leg, but I told people my wife beat me rather than admit I fell off a ladder.

Youch! Not that saying it was JUST your elbow is the right thing to say, but I am glad it was not worse.

Oh ouch - but I am so glad to hear that you are (mostly) okay!

Well for F - sake! Must be a contagiously bad week; my friend got hit by her own car! Fireman falling off a parked fire truck; 1 percent people are having 99% people arrest other 99 percenters; it's been one heck of a week! Maybe we'd all be safer living in a bubble.

Good to see you still are able to be in contact with the world! At least one good writing hand and a sense of humor still intact! Here's to a speedy recovery...

Hopefully you're not broken, just bruised.

That's all I got.

Don't do that again. I prefer hanging out with you guys in non-traction scenarios.