Re-posting this from Thanksgiving past (on the now defunct Switch 2 Plan B site). It first "aired" November 2009: 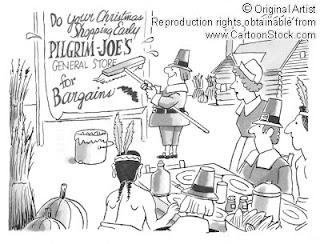 Do you think Pilgrim women pushed back from the table that chill November in 1621 and said to each other, “That was yummy. Now—pray tell—what time do the malls open tomorrow morning?”

Our culture doesn’t even take a collective breath—doesn’t even sit back and unbutton its topmost button to allow the bloated belly of excess fully digest the sin of gluttony—before we head out again to the stores.

No matter. With garish Christmas displays displacing Halloween items on October shelves, soon the ravenous holiday will swallow Thanksgiving whole. It will be folded into one big mega-season, to be renamed “Thanks-Mas.”

The entire back-story of America—with starving Puritans freezing their asses off that first fall until local natives took pity on their sorry butts, and brought them a noodle casserole—will get lost in the “Thanks-Mas” rush. Instead, the Pilgrims will be rebranded as anxious shoppers, bulking up on turkey and mashed potatoes before the doors opened up at 5 a.m. sharp at Squanto’s SuperMall, conveniently located just off of Route 95.

Originally, the season was known as “Thanks-Christ-Mas,” but for fear that the term might possibly offend .000000001% of the customers, slick ad men for colonial retailers shortened it up a bit.

Back at the Plymouth settlement, the men folk gathered at the publick house, drank a little too much grog, and watched the Detroit Lions lose (again!).

Young Goodman Brown was the first person to hang his colorful Thanks-Mas lights from the eaves of his log hut that Thursday evening in 1621, but annoyed neighbors promptly dragged him from his home and stoned him to death in the town square. (Soon the natives would become disgusted and invent their own holiday, known as “Quonset.”)

Then suddenly, right on cue, retro-looking 1960s-era stop-motion puppets walked haltingly into the village commons and began singing joyfully, thus reminding the colonists the true meaning of “Thanks-Mas.”
So Happy Thanks-Mas to all!

And don’t forget the reason for the season…which is, um…ah…is…um…oh dang, what was it again?

you need to blog more Dude,