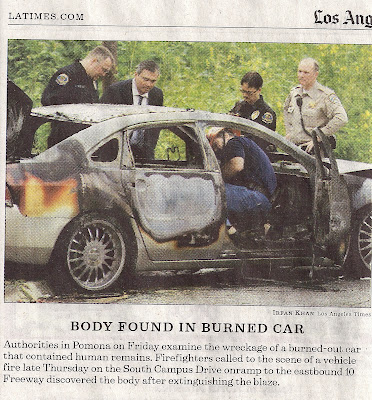 “...Yossarian was cold, too, and shivering uncontrollably. He felt goose pimples clacking all over him as he gazed down despondently at the grim secret Snowden had spilled all over the messy floor. It was easy to read the message in his entrails. Man was matter, that was Snowden’s secret. Drop him out a window and he’ll fall. Set fire to him and he’ll burn. Bury him and he’ll rot, like other kinds of garbage. That was Snowden’s secret. Ripeness was all.”
—Joseph Heller, “Catch 22”

Here’s what I know:

Sometime after midnight while we were on some bullshit medical run, I heard dispatch tone out an engine for a single-vehicle traffic collision with fire on a freeway onramp in our first-in. It would have been our call, if we hadn’t already been on this band-aid run, so the other other unit got it.

Maybe a half an hour later, after we were back in quarters and trying to get back to sleep, we got toned out to the scene of the car fire. They needed a truck company to extricate a body. Turns out it was a fatality fire.

When we pulled up, there were half dozen CHP cruisers blocking the intersection, and the county arson investigator’s unmarked pick-up. Fifty feet up the now-closed ramp was the burned out shell of a compact sedan. Highway patrol officers stood around indifferently, waiting.

Seems there were a lot of unanswered questions: What caused this late-night single-car accident on a relatively remote onramp? Why did this car that sustained seemingly minimal damage from collision show such heavy fire damage? Although the engine compartment showed little signs of char, the passenger space had clearly been fully engulfed—an unusual pattern. Was an accelerant used? Was the victim murdered and his car then deliberately set on fire?

No one wanted to claim jurisdiction. Local PD dumped it off on CHP and left the scene; CHP was now trying to pawn it off on our county sheriffs. While unseen chief officers on the other end of crackling police radios and cell phones dickered, we climbed off the rig and met up with our arson investigator.
He explained that after the cops sorted out jurisdiction and the corner’s van arrived, our crew would have to cut the car apart and get the body out. So we ambled up the ramp to size up our task and peered inside the blackened sheet metal.

I’ve seen my share of dead bodies—from infants to old people—and even some burned ones. But this was different.

The driver’s seat was just a black wire frame now, but slumped deep into this outline was a charcoal-colored heap; there were no discernable body parts. No ghastly silhouette of a head, torso, and extremities. Instead, just an ungathered mass, spilled out like some terrible secret.

In terms of extrication, it would be routine: Either spread the door, or cut the A and B posts to flap back the roof. It would only take a few minutes to give the coroner full access.

But it soon became clear that it was going to be a while before decisions were made, so the arson investigator sent us back to our home quarters. He’d call us back out when we were needed.

But he never did.

Later the next morning the intersection was clear.

Like so many calls I’ve been on these past 17 years, I never learned what happened—either before or after the event

But for a few moments in the middle of an otherwise nameless night,

I was called out to witness one small, grim piece

of some larger, unfathomable mystery.

Hope you don't end up naked in a tree like Yossarian

And still I wonder. How you, and all of the others who witness these scenes on a regular basis (firemen, police, ER doctors, field medics..) sleep. How DO you turn off those images? I think I would start awake every hour, at the very least. Please let us know "the rest of the story" when you find out.

I still can't get the image of my dad out of my head when he was comatose in the hospital. I can't imagine doing your job- especially without closure.

Ugh. There is no meaning to any of it. Double ugh.

I don't know how you guys do it...but thank you for keeping us all safe.

Did you ever find out the rest of the story here?

I know where you're coming from mate, that is indeed too much to bear. The images of those cleanup fire damage being put to a closure will forever haunt me, if that's to happen to me.