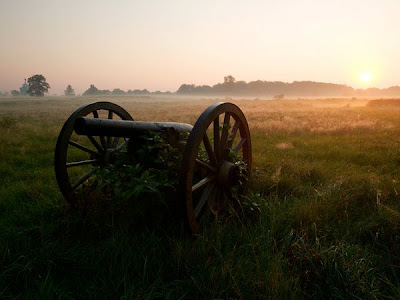 It’s been nearly a year since Gettysburg.

Last June, just days after Billy graduated junior high, he and I climbed aboard a Southwest Boeing 737 and flew to the Mid-Atlantic states for a carefully mapped out tour of Civil War battlefields, a trip that would culminate with a couple of days in Washington D.C.

But from the moment the departing aircraft sputtered sparks on the terminal tarmac, nothing about the trip went as planned.

See, when I got back home, I fully intended to blog the whole thing—the missed connections, midnight in Gettysburg, retracing Pickett’s charge in the oppressive summer heat, the paranormal presence in our Sharpsburg hotel room, the unexpected breakfast with Paul Giamatti and his precocious son, gridlock in Manassas, pizza in Fredericksburg, and—just half-way through the trip—the sudden defeat and surrender at Spotsylvania, my reluctant retreat from best-laid plans marching us off into unforeseen country.

The serial posts would feature some of my finest writing ever as I slowly unfolded the real story: A poignant tale about a man and his son, and the unexpected lessons the man learns along the journey.

But after setting the scene in the first two blog entries, I abandoned the project.

I’m not sure why.

Maybe the thought of it overwhelmed me.

And it wasn’t the first time…

Well damn it... don't do it again. There are times when I love your "to be continued"s. And times when it feels like it's just your way to avoid finishing the story. I have no ground to stand on; I've abandoned all of my blogs and websites, and they sit collecting dust like some digital ghost town. But you..? YOU are an amazing writer. Kick it into gear, Bubba... please?


(Heck, you got her to cuss goshdarnitall, so you'd best be writing your next installment before she comes and kicks your behind).

Do it for Billy... I'm sure he'd love your take on it. And we'll just come along for the ride.

Better finish the series. I'm too far away to kick anything, but sounds like your friends would do a good job of it without me.

Haven't been to your blog in awhile. Was hoping to see the rest of the story here.

Perhaps you got overwhelmed again, as you mention.

Will keeping checking though.