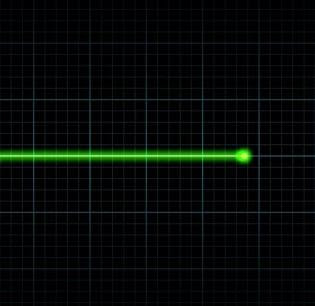 When we walked into the back bedroom, I was sure he was already dead.

See, I can’t remember really ever having to worry about it too much before. The paramedic squad would be right behind us, bring in their Zoll heart monitor, hook ‘em up, and most likely “call it.” But with the department’s recent reiteration of certain field protocols, the in-coming squad would be canceled if the on-scene firefighter/EMTs (emergency medical technicians) determined right then and there that the victim was dead.

As I’ve said before, there’s no point in working up an elderly person with extensive medical history who’s been down for a while. Chest compressions and all the drugs known to man just aren’t gonna help. So before we drag him in a tangle of blankets off his bed, ease him to the floor (best to do CPR on a hard surface), and start pumping on his chest, we can verify certain criteria.
Moments before, as we sped to the call, sirens and lights, our boot firefighter admitted he’d never been on a full arrest and had never used an AED (automatic external defibrillator) on an actual patient. Now I stood in a tiny bedroom with that same wide-eyed fireman waiting to follow my cues.

While our captain took the old man’s wife aside, we established that our victim was pulseless and apneic, and began checking for additional signs that would let us off the hook, in regards to initiating CPR.

Evidence of rigor mortis? I tugged gently on his lower jaw, and it did not seem to give readily. Post-mortem lividity? We rolled him slowly on his side, lifted his pajama shirt, and observed what appeared to be that purplish discoloration caused by pooling blood that can occur within 20 minutes of death.

The captain glanced up from his clipboard and looked at us expectantly. “Well?” the raised eyebrows seemed to ask. Are we going to cancel the medics and call it, or start CPR and continue them in?

Protocols also call for auscultating heart and lung sounds for at least 60 seconds, but as the rookie would later confess (and I remember all too well from my days as a new fireman), when you steady that stethoscope to the victim’s chest and listen intently, trying to block out all external distractions, you’re so nervous that you begin to second-guess whether the steady thrum you hear is indeed the pounding of your own heart and not the patient’s.

Nervous, because the next words out of your mouth had better be definitive.

And even though that may be a foregone truth, it will be you, in fact, who acknowledges this reality for the first time—for the anxious wife, the concerned children, and the well-meaning friends all to hear.

And it will set off a chain of events.

No, there will not be any life-saving measures…
No, there’s not going to be a paramedic squad coming in…
No heart monitors, no defibrillators, no ambu-bags…
No

And we have been told: When informing family members, do not use euphemisms such as “passed away” or “gone on,” or any other gentle yet gauzy terms you may be tempted to couch this hard truth in just to help sooth loved ones or ease your own conscience. The pronouncement must be unambiguous:

There is nothing more we can do

…And so maybe I did pause, if just for moment. And in that split second, feel a dizzying kaleidoscope of sorrow and pain suddenly coalesce. Pulled back to those moments in my own life when someone I loved slipped away.

There is nothing more

Email ThisBlogThis!Share to TwitterShare to FacebookShare to Pinterest
Labels: firefighting

The Doctor is In (Reposted from "Switch 2 Plan B") I’m standing in the middle of the physical therapy gym of the rehabilitation center in downtown Boise.

As I wait for Gary, I watch others hobble in and out. A gray-haired man stares out the window as he slowly pedals nowhere on his stationary bike. Another man—his wife at his side—lies patiently on a padded table as a therapist attends to his ankle, gingerly working the joint back and forth. The elderly and young, sick and injured, all around me are people—crumpled, lame, exhausted.

Outside the huge plate glass window, pedestrians—Plato’s shadows—hurry by, pretending not to see into this brightly lit clinic. They are well-dressed and walk purposefully past.

Back here inside, I notice that even one of the therapists is limping.

in this single moment

In here, the broken help the weak
the injured attend to the dying
while we all await our turn
as servant and the served

Every one of us
Incomplete
fallen
in need

None of us whole

none of us well

Each of us
Depending
on the other.
And…

Christ told us,
then showed us,
feed those who are hungry,
clothe those in need,
visit the sick and imprisoned…

because sooner or later
we will all find ourselves
starving, suffering, alone
in a prison of our own making

Outside
are shadows.
An unreal
fantasy
where we imagine ourselves to be
healthy and happy
independent

So welcome to the hospital...

The doctor/
The patient/

Magic (Reposted from "Switch 2 Plan B")

(My sister Amy asked that I repost a few stories from my former blogspot, "Switch 2 Plan B"...So, here you go!) In the Middle Ages, alchemists sought to transmute base metals—iron and nickel—into something far more valuable: gold and silver. They failed, of course.

My dad, on the other hand, made it look easy.

One of my favorite childhood memories: Small town, upstate New York. It’s early morning. Outside, a foot of snow on the ground. I’m burrowed deep beneath warm blankets heaped on my bed. From downstairs I can hear my dad stirring milk into his coffee, the metal spoon softly ringing against his stoneware mug. He grabs his leather briefcase and puts on his favorite fedora—still standard issue for businessmen in the 1960s. I hear the garage door roll up, and the old Mercury turn over in protest against the freezing temperature. The tires crunch across the new snow, and I hear his car drive off down the street.

It was the sound of constancy. Steadfast, reliable, faithful, enduring. And I knew I would hear again the next morning. And the next.

My father took the base materials of ordinary life and—day by day, year after year—transformed them into something far more valuable: A family. A home. A sense of abiding security for six young kids.

He never complained, never got drunk, never filed for divorce or walked out on his many considerable responsibilities.

On Saturdays, he mowed the lawn.

Dad was the second son of a Polish immigrant. His father fled Krakow ahead of the Russian army, which was sweeping across the countryside, forcing all young men into service. As a seventeen year-old boy, grandpa sailed into Boston harbor with a work visa in his hand, and never saw home again.

My dad grew up on a farm, and after serving in the Army, he went to work for IBM on early versions of the computer—vacuum tubed, magnetic tape-spinning, punch card-munching behemoths that filled entire rooms at the time. At Hughes Aircraft, he helped develop the Intel Sat VI communications satellite. Today, a model of that craft is on display in the Smithsonian Air and Space Museum.

I often wondered if, every now and then on his way home from work, my dad ever daydreamed of the “what ifs” or “might have beens” of his life, like Walter Mitty asleep at the wheel. If he did, he never let it show.

On a new moon night you could probably make out the faint light of his satellite still making its orbit high overhead. Constant. Reliable. Faithful. But that is not his life’s achievement. He built an amazing world for another kind of satellite—those who would fly higher and venture out farther. First six. Then eleven. Tomorrow...who knows?

Out of the ordinary: Gold.