But all in all, it probably wasn’t my worst parenting fail ever.

The night started off innocently enough, I suppose. I was standing at the bar in the Rising of the Moon pub, drinking Jameson (and not that Protestant shite, Bushmill’s), while talking with a drunk Pinkerton detective. He was buying.

The warm Irish whisky had emboldened me enough to insult my commanding officer—Brigadier General of 2nd Brigade, 1st Division, II Corps who was also at the bar—which got my company captain laughing, before saying, “Hey, we should all go over to the bordello and visit some Dutch whores!”

Seemed like a fine idea to me, and soon a small knot of officers, non-coms, and enlisted men like me (and my 20 year-old kid) were stumbling down the dark road towards this tent of ill repute.

It was over in the Confederate side of camp. 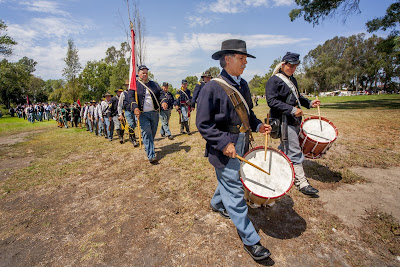 See, a few months ago and against all better judgment I fell in with a group of Civil War re-enactors. They portray Company C of the 69th New York State Volunteers—part of the legendary Irish Brigade during this country’s war between the states.

For years, I swore I’d never do something like this. After all, I considered myself a serious armchair historian, so donning a uniform and assuming a character seemed reductive. And sad.

Having read Tony Horwitz’ “Confederates in the Attic,” I also assumed that all reenactors were humorless pedants—obnoxious purists with an overinflated sense of self-importance derived from their annoying insistence on period-correct detail.

But that description doesn’t fit the guys of the 69th.

Profane. Outrageously funny. Generous. Fiercely loyal. Family men. Most of these guys are firefighters and first responders, public servants and government employees. There’s no pretense. No delusions of grandeur. They try not to be too “farby" (you can look that one up), but they don’t drain all the fun out of it, either.

Yeah, the heavy wool uniforms are brutal in the summer heat, the hobnail brogans are absolutely sadistic, and field-cleaning a 1861 Springfield replica is tedious at best. It’s not an easy hobby. So of course, I had to try it. 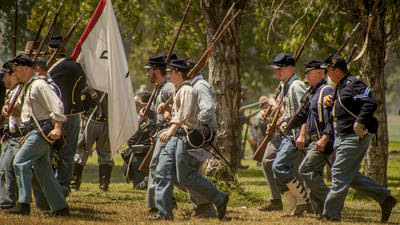 But you really join up for the camaraderie.

Unfortunately just as I enlisted, historical reenactors came under heavy fire from a formidable new foe—and it isn't Johnny Reb. No, the enemy is smug, short-sighted “social justice warriors” on a mission to silence any expression of this country’s past that does not conform to their Orwellian vision.

Antifa demonstrators across the country are pulling down statues, desecrating cemeteries, and vilifying even Ulysses Grant and Abraham Lincoln. Under the threat of such violent protests, several long-standing Living History events have been canceled. After all, according to a 2016 article written by VICE‘s Wilbert Cooper, such reenactments are simply an “attempt to fantasize about living in a bygone world of white supremacy.”

All I can say is that has NOT been my experience.

Two qualifiers:
1.) I belong to a Union army unit. While joining a Confederate group may seem more precarious in this current political climate, all I can say is that for there to be a battle re-enactment you have to have two sides, winners and losers. Wouldn’t be much of a show if only one army showed up.
2.) I can only report what I’ve observed.

That said, reenactment is not some good ‘ol boys club. Female reenactors are a common sight. Many (on BOTH sides) are noncommissioned officers or hold high rank. One of the generals in our Union Army of the West is a woman.

Many different races, ethnicities, and religions are represented in the ranks: White, Asian, Middle Eastern, Hispanic, and Black. Our quartermaster sergeant is Pakistani. At my first event I fought alongside an Asian twenty-something woman. And this past weekend, I observed an African-American gentleman fighting on the Confederate side. I know that none of this neatly fits certain narratives.

It’s a family event. Our weekend campsite is comprised of men and women, husbands and wives, fathers and sons, and even entire families with toddlers and preschoolers. Some in period dress, others in Scooby Doo jammies. 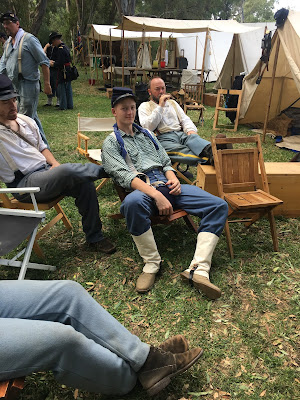 All of the above holds true of the spectators as well. Families stroll the re-enactment camps, take pictures and ask questions, shop at the sutlers tents, peruse historical displays, and join in period games and dances. Since these events draw from the surrounding communities, our Huntington Beach crowd last weekend was largely Asian, Hispanic, and white.

So there’s definitely a disconnect between what protesters are claiming and what is actually taking place. And this is America: A vocal and violent minority cannot tell us what we can and cannot do. They do not get to approve or deny our weekend amusements. And I don’t have to justify myself to ANYONE. I don’t owe any group an explanation or defense of Living History events. And they don’t get to shut it down.

But I guess it shouldn’t really surprise me that the generation criticizing re-enactors for putting on historically accurate costumes and playing Billy Yank is the same generation that dresses up like Harley Quinn and Cassian Andor and lines up by the thousands for Comic Con.

As I said, for the re-enactors themselves these events can be equal parts cosplay, weekend camping, frat party, history class, and gun club.

As an amateur historian, I was finally drawn in by the chance to experience vicariously some semblance, however slight, of what life may have been like for the common soldier during the Civil War. It also seems like a good way to continue some of the experiences that my son and I shared during his time as a Boy Scout. (He “Eagled out” a few years ago.)

My son—like many young men—has always sought out unique, intense, and challenging experiences, preferring outdoor activities in spartan conditions. And he craves the camaraderie that the close-knit reenacting units provide.

Oh, and the whore house thing…

At night, after the crowds of spectators go home, these Living History camps come alive: Canvas-walled pubs open up, cotillions commence with officers in dress uniform bowing to ladies in hoop-skirts, and musicians pull out mandolins and banjos and sing “I Wish I Was Back Home in Derry.” These camps feature many of the attractions—and vices—that traveling army camps had back in the day. Including, as it turns out, a “bordello.” 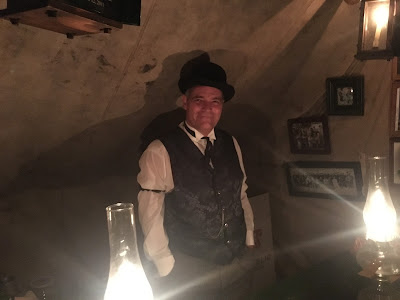 Of course the coquettish lady there is no more a prostitute than I am a solider. She pretended to flirt with some of the boys while we sat at a faro table and a shady card dealer tried to teach us the most popular game of that era. (I think he might have been cheating, but I‘m not sure.)

And while the nighttime visit to the whorehouse was faux fun, the boys could seek out real-life repentance and redemption the next morning. This Living History camp also featured a Roman Catholic Mass in Latin. 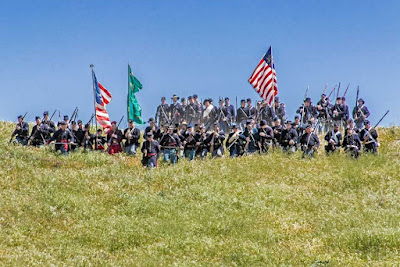 (*I noticed that the Rebel units didn’t fly the now-notorious battle flag of the Army of Northern Virginia, and instead unfurled unit banners or even the flag of the Confederacy itself—which 99.5% of Americans would not even recognize. Probably a prudent move on their part.)
Posted by brian at 6:55 PM